When the new Ford Bronco was confirmed in 2016, our phone started ringing, and it hasn’t stopped. We’ve been getting calls, emails, texts, and questions on social media all asking us for our thoughts and predictions on the new Bronco.

When reconfirming that the new Ford Bronco would start production in 2018, both online and in-person at the Detroit Auto Show, only a logo and stock image were released, leaving Bronco fans everywhere hungry for more.

Here’s what we know for sure about the new Bronco: 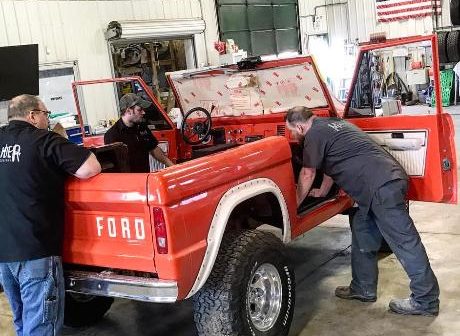 Based on our passion, obsession, and experience with Ford Broncos, here are eight things Maxlider Brothers Customs believes will come along with the newly designed Ford Bronco:

Maxlider’s Kris Maxlider strongly believes that the new Bronco will pay tribute to the first-generation body, much like the 2004 Ford Bronco prototype. We believe and hope that Ford modernizes the classic look rather than trying to adapt the Bronco to mirror the style of the successful Ford Raptor pickup.

If you look at the evolution of the Jeep Wrangler over the past fifty years, it has hardly changed due to its popular and classic style. I’m fairly confident that Ford will not shock us with a completely futuristic design that looks nothing like the original. After all, why bring back the Bronco if you’re not bringing back the Bronco!

The new Ford Bronco is very likely to have solid front and rear axles, giving it better off-road performance. The first-generation Bronco (1966-1977) had a solid front axle, but in 1980, they switched to an independent front axle.

In just a few years, the EcoBoost engine has forever changed how power is taken from the engine to the road.  Ford’s twin turbocharged V6 blows away every traditional V8 engine and is more eco-friendly. Expect Ford to offer V4 and V6 EcoBoost engines in the new Ford Bronco.

The new Ford Bronco will try to capture a large chunk of the market currently dominated by the Jeep Wrangler. Due to the success of the 4-door Wrangler, and the change in how we use off-road vehicles today compared to 50 years ago, expect Ford to offer a 4-door option. This may not be available the first year, but we’d be very surprised if there was not a 4-door Bronco by or before 2022.

From pickups to the new Jeep Wranglers, we’re seeing an industry-wide shift to aluminum. We fully expect the new generation Bronco to have an aluminum body.

Like the original 1966 Ford Bronco Roadster, we believe the new model will also have a removable hard-top. The “snap-out” roof panels will bring back the roadster look. This rumor, also believed by others, is another reason we think the new Bronco will pay tribute to the original body style.

Also like the original Roadster model, we predict the new build will come with removable doors. This will be just one of many customization options available on a vehicle that’s being built to compete with the most customized car or truck in the world — the Jeep Wrangler.

You don’t drive a Ford Bronco to fit in; you drive a Bronco to stand out. The prediction that we’re the most sure of in regards to the new Bronco is that the aftermarket for Ford Bronco parts and equipment will absolutely explode shortly after its release. After the market is filled with tens of thousands of new Ford Broncos, their owners will modify them to stand apart.

View the Maxlider Brothers Customs inventory here to find the hot rod of your dreams today!